A bush is a piece of scenery found all over Gielinor. Usually bushes can only be examined but in Digsite and near Watchtower some bushes can be searched.

During the Digsite (quest) a bush may be searched to find a Rock Sample. 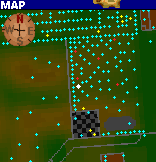 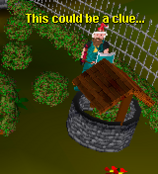 Search the bushes for clues.

Before starting the quest:

Player: I am not sure why I am searching this bush...

After player has started the quest but searching a bush that contains nothing:

Player: Here's Some armour, it could be evidence...

Player: I've found an eyepatch, I better show this to the wizards

Player: Aha a dagger
Player: I wonder if this is evidence...

"Disgusting! some fingernails
They may be a clue though... I'd better take them"

Player: Aha! a robe
Player: This could be a clue...

Searching a bush again while player already has the item*:

*This does not apply to the armour or dagger bushes, as those bushes will give the players duplicate items while they hold the item in their inventory