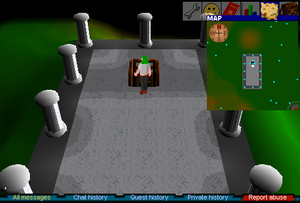 The Temple of Ikov is a dungeon located northeast of Ardougne. Players who have progressed through the quest far enough to get the Shiny key may use the alternative entrance located in the building just north of McGrubor's Wood.

Inside of the Temple of Ikov is the only location players where players may obtain Ice Arrows.

Outside of the quest, the dungeon has little utility for the average player. 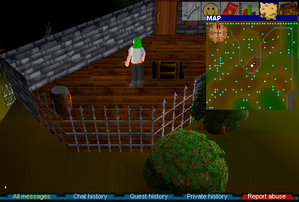 Alternative entrance for players who have a Shiny Key 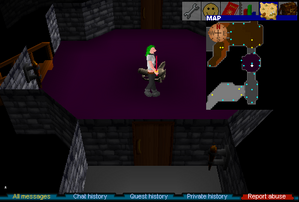 Players must be wearing the

Pendant of Lucien in order to enter the Room of fear otherwise they will get the message: 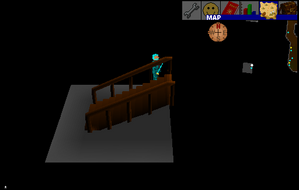 Players who do down the Stairs in the room of fear without a lit Candle will enter a dark room and get the message:

If players light a Candle while they are in the room or if they go down the stairs with one lit initially they will enter the lit room.

Lighting a candle while in the dark will will take players to the lit room and give them the message:

"You light the candle
Your candle lights up the room" 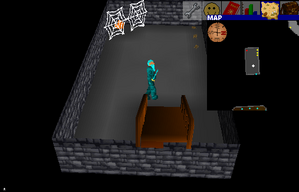 Players who go down the stairs with a lit Candle will enter the lit room and get the message:

"Your flame lights up the room"

Inside the lit room are 3 spiders, Webs, and

Boots of Lightfootedness. Players need to cut the web in order to access the boots. 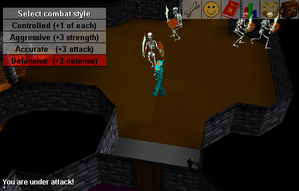 Going north from the room of fear will take players to a room with level 54 skeletons.

Going west players will see a bridge. Players who attempt to open the door across the bridge without wearing

Boots of Lightfootedness will fall into the lava below and take damage. They will also get the following message: 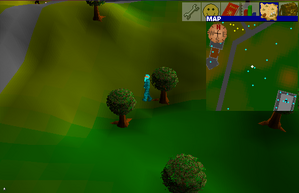 Location of where ladder takes player

For the players who fall fall down, they will also have to deal with the 3 scorpions if they are below level 43 combat. There is an ladder located to the south players can use to escape to the surface.

Players who open the door while wearing the 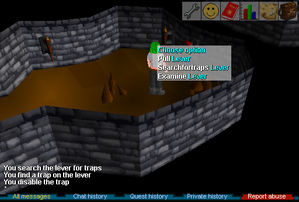 North of the skeletons is a trapped lever. The lever is used to unlock the door to the Ice spider cave. However, players must select the "Searchfortraps[sic]" option on the lever before they attempt to pull it. Failure to do so will result in the player taking damage. 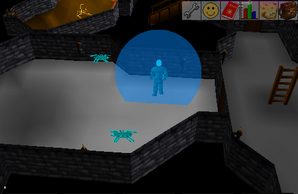 West of the main entrance ladder is the Ice spider cave. It contains 2

Ice Arrows spawns at the end of the cave and 3

Ice spiders throughout the length of the cave. Upon picking up the Ice arrows players will be teleported to the entrance of the cave. Which greatly increases the difficulty for players who are attempting to obtain several of them.

Players will get the message when they are teleported to the entrance to the cave:

NOTE: Once a player has unlocked the door to the Ice spider cave they will not have to re-pull the trapped lever. 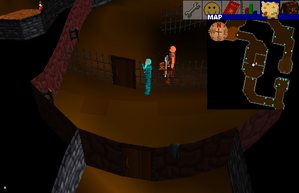 West of the trapped lever is a locked door and a Lever Bracket. In order to unlock the door players must use the

Lever item on the door. Players must then quickly pull down the lever, otherwise the lever will despawn and you will have to get another.

NOTE: Once a player has unlocked the door they will not have to reassemble the lever and pull it again.

The Fire Warrior of Lesarkus is in a caged off area and can only be killed if a player ranges them with at least an initial ice arrow. Upon killing him players will be able to open the door near him and progress further into the dungeon.

NOTE: Once a player has killed The Fire Warrior of Lesarkus they will not have to kill him again. 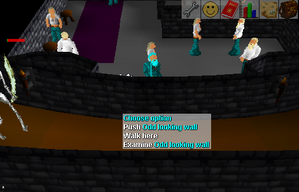 In order to cross the lava player must pay Winelda 20

Going north of where you were teleported is a ladder that will take you to a building that is located north of McGrubor's Wood. However, players need the

Shiny Key in order to exit the building.

The shiny key is located east and then south of the ladder, where the 4 Lesser Demons are located.

Between the area of the ladder and shiny key is the Guardian of Armadyl room. It can only be accessed if players push the Odd looking wall. 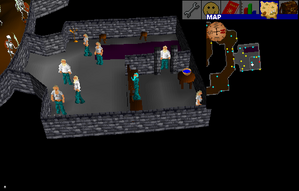 This room houses the

Staff of Armadyl. Which the Guardians of Armadyl have been guarding for generations. The guardians themselves are not combative. However, If a player attempts to take the staff or upsets them by choosing dialogue that speaks of their allegiance to Lucien players will be engaged in combat.

During the Temple of Ikov quest, players who side against Lucien will receive the