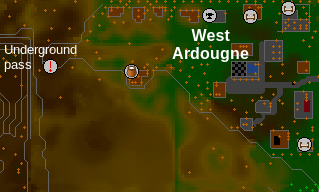 West Ardougne is the side of Ardougne that has been quarantined due to concerns of the plague that seems to be infecting its citizens. It features prominently in the quests Plague City, Biohazard, and Underground Pass. Its ruler is King Tyras, however, he seems to be falling out of favor with the people. The city is in a particularly dire state compared to East Ardougne, with many rats scurrying around; rotten apples, animal skulls, ashes, fungi, and fallen trees also litter the ground.

A manhole next to Jethick leads downwards into the Ardougne sewers, which provide a means of access from Edmond's house in the Plague City quest. In the Biohazard quest, Omart provides a rope ladder for access over the Ardougne wall. The gates are opened by order of King Lathas in the Underground Pass quest. 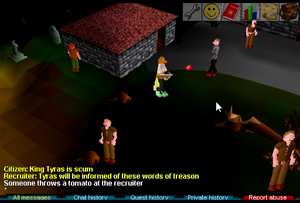 The recruiter, next to some citizens and a tomato 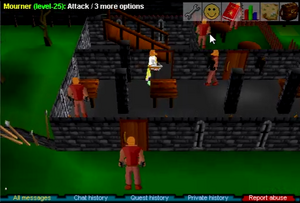 The building filled with mourners

A recruiter may be found in West Ardougne attempting to persuade the king's citizens to join him in "crusading in the darklands of the west".

The Civic Office of West Ardougne is a governmental building based in West Ardougne. It is occupied by Bravek, the city warder, and his clerk. Along with the office, a church complete with an altar seems to be well maintained in spite of the decrepit environment.

It is also home to the Rehnison Family and Jethick, who are featured in the Plague City quest. Kilron assists the player by helping them climb out of the city in the Biohazard quest, and a doctor's gown is stolen from Nurse Sarah in order to impersonate a medic.

Mourners have a particularly ominous presence in the city and have imprisoned Elena in an abandoned house.

Dark Mage resides in the northern building near the wall. He can repair broken Staves of Iban for 200,000 coins.

Players may sell their Cat to the Civillian (male NPC) for 25 Death-Runes.

There are dangerous trees here. The dying trees can be approached or searched. Doing either option will result in the tree attacking you and dealing damage. However, the tree will not kill you. Though, you will be left with very little hits if you continue to harass this tree!

There is a particularly large graveyard containing many gravestones. 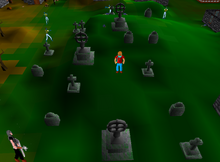