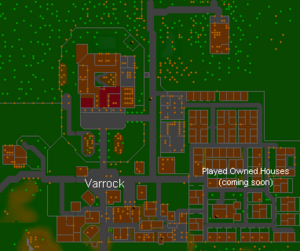 Historical map of Varrock as teased on jagex.com in November of 2000, prior to the release of RuneScape

Player owned houses were an early concept present in RuneScape even before its release on 4 January 2001. Ultimately, "Player Owned Houses" were never made available to players to own. In most respects, the content was unreleased, and the concept was abandoned entirely in Classic on 26 July 2001 (Update).

Player owned houses existed on the World map for the first 6 months of RuneScape as an inaccessible area, teased to be released fully in the coming months.

This quote from Tip.it archives[1] in January 2001 describes the original concept:

As I have seen on new Official Discussion board Andrew posted a reply on houses. I can't remember all but in short lines there is still a some months before it will be finished, there will be different houses from 3 x 3 rooms to 4 floors building and there will be chests in so you will be able to leave your items in guards and thief's permitting ;-), There will be ton of things to buy for your house too. He don't know yet what a prices will be but it will depend on offer and demand. .

The Player Owned Houses concept predates the ability to Bank items, so it would have been the only place to leave your items. Houses would have been non-instanced, and the land on the map actually owned by a specific player. As RuneScape had not exploded in popularity yet, or even been released when the homes were designed, this still seemed like a feasible concept.

On the release of RuneScape, these buildings existed in Varrock:

All in all, this would have provided accommodations for 134 individual people[2] (and perhaps their best friend/significant other), 6 clans of between 5 and 10 people, and 2 clans of two to three dozen members each, for a generous estimated maximum capacity of around 350 people and an actual 142 properties available[2].

By April of 2001, there was still only one game world, but it was sometimes seeing peaks of over 1024 players online simultaneously.[3] RuneScape's success was a problem for the concept of Player owned houses, but Andrew had not yet given up on the idea. He added more Player owned houses to the map with the release of Asgarnia, in Falador.

In retrospect, the added capacity from these homes would have been like trying to put out a bonfire with a turkey baster. These homes were likely placed as a way to show players that the idea wasn't abandoned and was still planned to come out soon. Andrew would make a public statement to Tip.it[4] re-committing to Player Owned Houses two weeks later:

After talking to Andrew he said that Player Owned Houses WILL be for auction, so there will not be a set price. Also he commented that due to high demand it's looking like that POH's will be for clans only.

At this point, it may have seemed like the free market would take care of the supply-demand issue, as the continued growing popularity of RuneScape had not yet become evident. It wouldn't seem to be so bad if the houses were just so expensive that only the top 10% of players could afford one. However, that percentage would quickly become much smaller.

Three months later, on 26 July 2001 (Update), the Player Owned Homes were removed from the map. Runite items and the item bank were released at the same time, two other highly anticipated updates, to help ease the disappointment. Andrew says in the news post:

The player owned houses have been removed. This is because since they were original planned runescape has become much more popular and there is nowhere near enough to go around. Instead the 2 updates above have been included to compensate. The item bank lets anyone store the items they want to, and the runite items are an alternative for people to spend the money they have been saving on.

The idea of Player Owned Houses was one that Jagex never fully abandoned, as evidenced by their eventual release on 31 May 2006 in RuneScape 2.

Some players have believed the Carpentry skill (added to the stats menu on 30 April 2002 and removed by 12 December) had some relation to the idea of Player Owned Houses. The work required to implement Player Owned Houses would require several more years to be completed, but it would turn out to be true that "Carpentry" was linked to Player owned houses. This is evidenced by the fact the name "Carpentry" would be mentioned in a Behind the Scenes article from June 2005 referencing the in-development Construction skill.

A less obvious impact that Player owned houses had, is the impact had on the final design of the world map. Their influence on the world map is sometimes seen even into modern versions of RuneScape.