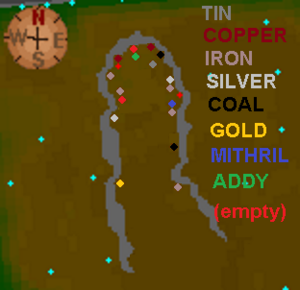 The Al-Kharid mine (also known as the Chasm) is located north of Al-Kharid. It is not very advisable for low level players to mine here because of the dangerous level 21 scorpions. The scorpions will stop being aggressive at Combat level 43.

One of Dimintheis' sons (Man) is located here and plays a role in the Family Crest quest.

Mining adamantite rock in Al-Kharid mine.