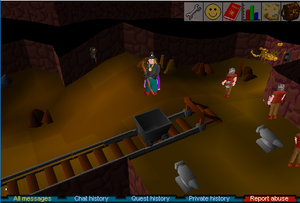 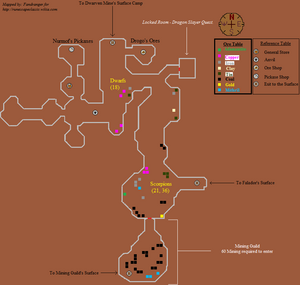 The Dwarven Mine is a twisting series of passages housing many different rocks, from clay to adamantite. There are two entrances to the mine.

The first is just south of the Ice Mountain. This area contains non-aggressive level 18 dwarves, as well as Drogo's Mining Emporium, a General Store and Nurmof's Pickaxe Shop. This entrance is preferred by low-levelled powerminers, as there is an abundance of clay, tin and copper rocks, though the distance from the bank prohibits effective traditional mining. There are four anvils nearby (though the lack of a furnace makes them practically useless, though it could be noted that the Dwarf NPCs some times drop bronze or iron bars when killed), and a spawn point for Boots, Pie Dish and Bronze Chainmail.

The second entrance to the mine is further west, and can be accessed through Falador. This area contains several ores from Copper and Tin to Mithril and Adamantite, but is inhabited by Scorpions and King Scorpions, making it dangerous for any low levelled miners. It is an effective mining location at higher levels, however, due to the proximity to the bank. There is also a slightly more convenient exit into the adjacent Mining Guild, but this requires 60 mining to use.

A seemingly inaccessible room located in the path between the two entrances plays a part in the Dragon Slayer quest. Oracle in Ice Mountain will give a riddle that points to keys needed to enter the room. The keys are: Lobster Pot, Unfired Bowl, Silk and Wizard's Mind Bomb.

A king scorpion, which inhabits the mine.

There are many inhabitants of this mine. These include:

Low level players should be cautious when inside the mine, as there are many dangerous monsters within it.