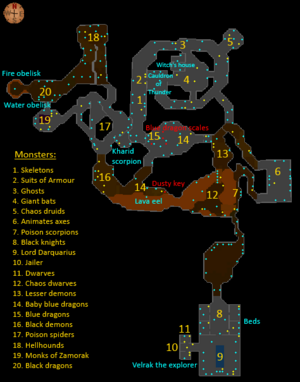 The Taverley dungeon is a dungeon that can be entered from a ladder south of Taverley. This dungeon is the largest in RuneScape Classic and was added during the introduction of member worlds.

Taverley dungeon is the only location to get blue dragon scales needed to make weapon poison potions. It is also the most popular place to kill legendary Blue and Black Dragons.

Black Knights Base is a chamber with multiple rooms in the south western corner of the dungeon, past the Animated axes and Poison scorpions. Just before the building is a cavern with walls decorated by torches. Several barrels and sacks sit along its northern wall.

The entrance is comprised of a hall way with two tables, and four small rooms with doors, beds. Each room has torches on the walls. The northern most compartment rooms have tables in addition to beds and torches. Black Knights can be found wandering the hall way and four rooms. A set of double doors, which can be closed, lead to the main chamber.

The main chamber has two longtables to the right and left as you walk in. An aggressive monster, a unique level 76 Black Knight named Lord Darquarius wanders this room. A blue strip, assumed to be a carpet is in the center of the room. This strip leads to three thrones. There are four decorative torches on the southern wall. Near the western and eastern wall there are three tall candles each.

On the western side of the main chamber are two jail cells. Outside of the cell is the level 51 Jailer, who must be killed in order to obtain the Jail keys, which are used to obtain a Dusty Key from Velrak the explorer, who is imprisoned in the southern jail cell.

To get the key, kill the jailer and use the jail keys on the cell door that is keeping Velrak imprisoned. Talk to Velrak and tell him you would like to try exploring the rest of the dungeon to receive a Dusty Key. Players who have completed Legend's Quest are able to purchase a Dusty Key for The northern cell holds two level 18 Dwarves. Two rats wander the hall way and can become stuck in the jail cells.

In total, the Black Knight's Base is home to eight level 46 Black Knights, and one who tends to wander in the cavern just before the entrance.