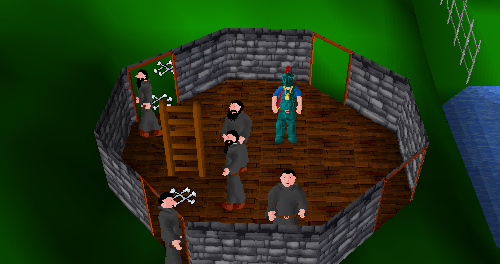 The Dark Wizards Tower is west of Falador, and north of the crafting guild. The south portal in the Wizards' Guild teleports the player here. The tower is an octagon shape with three levels including the ground floor.

The ground floor of the tower has a spawn of five dark wizards and is a useful location for obtaining runes. There is a ladder going up to the first floor.

The ladder on the ground floor will bring you to a room with two Dark Wizard spawns. There are two pentagrams on the floor, and a ladder that goes up to the second floor.

There is a spawn of four Dark Wizards here. There is also spawn of one Chaos-Rune here. The room has four pentagrams on the floor and four bookcases.

The fastest way to bank is to climb the handholds which require level 5 agility. This shortcut back to town is east of the Dark Wizards Tower and is a one way access to the inside of the Falador west wall. You can then bank in either of the two Falador banks and then use the south gate, traveling west along the outside wall and fence and then north through the gate, or by traveling the Taverley gate and then south, to get back to the tower.