Asgarnia is one of three kingdoms across Gielinor in RuneScape Classic. It is defined as the area found in central Gielinor, bordered by Misthalin and Kandarin. It is a monarchy ruled by King Vallance. However the King has mysteriously disappeared and so in his place rules Sir Amik Varze, the de facto leader of the White Knights rules in his place. The White Knights are its main military force, with their headquarters being located in the kingdoms central city, Falador. 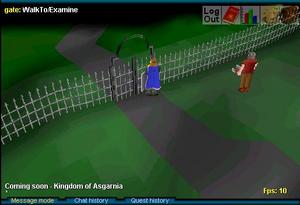 Teaser prior the release Kingdom of Asgarnia
Retrieved from ‘https://classic.runescape.wiki/w/Asgarnia?oldid=119559’
Categories: