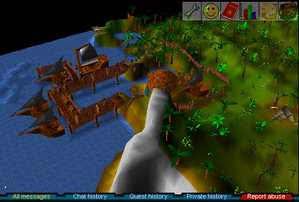 The Ship yard is a fenced off area located on the island of Karamja. It is being used by Glough to build a fleet of gnomish war ships and is inhabited by shipyard workers and shipyard foremen under his employment.

There are several two-way Gnome gliders which can take you to the ship yard, these locations allow travel in both directions:

There is a net/bait fishing spot in the north east. Players can only access this area after learning the password required for entry during The Grand Tree quest. After a player has completed the quest there is no way to gain re-entry into the fenced off area.

The examine for all the ships at various states of construction are "A ship to Karamja" which is factually incorrect as they are intended to be ships that will invade Port Sarim.