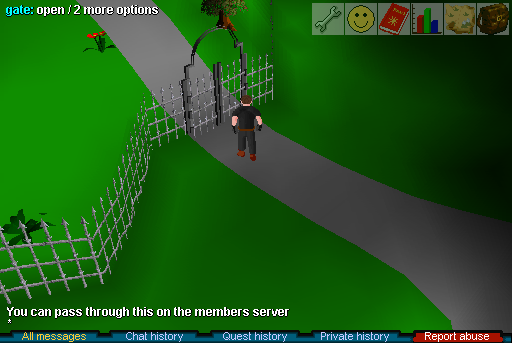 The Member's Gates were gates that restricted Free-to-play access from the Free area into the Members portion of the RuneScape world. For members, these gates indicate which areas once were only accessible to free players.

Unlike regular gates, Member's Gates are automatically closed after passing through them. Even on members world the examine text: You can pass through this on the members server, remains.

There are 10 iron gates that separate Free-to-play from Members. This list of gates does not include the Stone Gate at Shantay Pass or the wooden gate in south-east Varrock.

Many of the Member's Gates were historically used in other places, or were repurposed from earlier gates.

There used to be three more Member's Gates in the wilderness, until 8 May 2002 (Update) when the Bandit Camp, Dark warrior castle, and Overgrown village were made Free-to-play. These gates can still be found in the internal game files, but are no longer used in-game.