The Black Arm Gang is one of the 2 gangs introduced in the Shield of Arrav quest, the other gang being the Phoenix Gang. To become a member of the Black Arm Gang, during Shield of Arrav, you must acquire 2 Phoenix crossbows for Katrine. Once this is done, the player will then be allowed to join the gang as Katrine will then think the player is worthy of joining the gang.

The 2 gangs are featured again in the Hero's Quest. In both quests, you will need a friend in the Phoenix Gang to help you.

The gang has two known hideouts. One base can be found in the city of Varrock, and the other on Palm Street in Brimhaven.

The gang's base is located in south-western Varrock, near the city entrance. 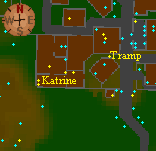 The Brimhaven base is located on the Palm Street just above Davon's Amulet Store. Trobert and Grubor are the local contacts here.