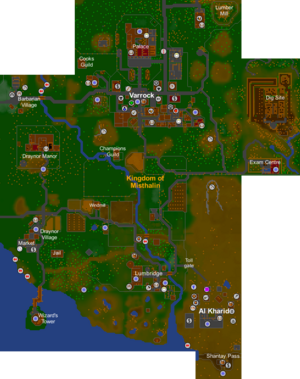 Misthalin is one of three kingdoms across Gielinor in RuneScape Classic. Misthalin is ruled by King Roald, who has a palace in its capital of Varrock. It is a monarchy similar to Kandarin. The kingdom is located in the far eastern side of Gielinor, bordered by Al Kharid to the southeast. The kingdom is a central trading hub among the smaller farm villages of Draynor and Lumbridge.

Most new players tend to stay in this area until they have completed some quests, advanced their skill levels, and become more comfortable with Classic.