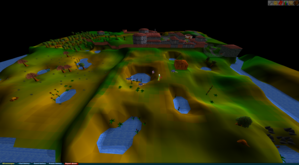 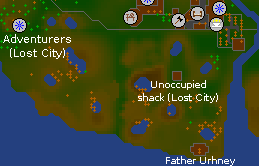 Lumbridge swamp is a large expanse of space south of Lumbridge. The swamps are infested with level 8 rats. These rats all have 5 Hits with a max hit of 1. These swamps are only dangerous to new players starting out. The swamps contain a substance known a swamp tar. Swamp tar is used in several quests, such as Sea Slug.

Lumbridge Swamp is used in several quests. These quests are:

Father Urhney is living in his shack in the far south-east area of the swamps. You can get a Amulet of Ghostspeak from him, which enables you to speak to ghosts.

In the western area of the swamps, there is a group of Adventurers searching for a city on a different plane than RuneScape. You can help both people out.

For players who have completed the Lost City quest, the smaller, unoccupied shack may be used to access Zanaris.

The swamps offer many different natural resources. These resources range from ores to swamp paste. In the Southeast area of the swamp, near Father Urhney's Hut, there is a large mine containing 6 coal rocks, 4 mithril rocks, and an adamantite rock. There is a large field full of swamp tar near the north-west area of the swamp, near the Adventurers. The closest banks are in Zanaris and Draynor.