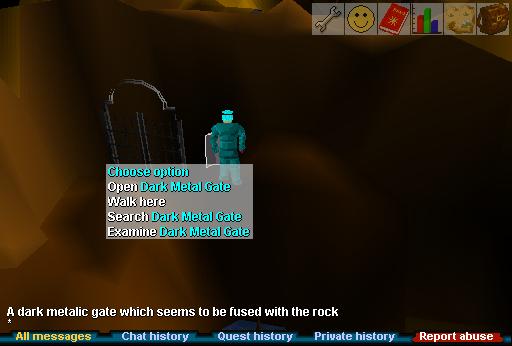 Dark Metal Gate is a Magic obstacle in the Legends caverns. During and after Legend's Quest a charge air, water, earth or fire orb spell must be cast with Unpowered orb to open it. Casting the spell will shatter the orb and teleport the caster to a different part of the cave system. The destination chamber contains Strange Barrels.

The gate is located in a chamber with Half buried remains and seven Carved Rocks, after Ancient Wall.

This gate is fused with rock, it doesn't seem possible to open it.
But it does look slightly strange in some way.

It just looks like a normal gate...
At first...
And then you notice that some of the bars of metal make up letters.
After some time you manage to make sense of it...
Would you like to read it?

You attempt to read the message in the gate... 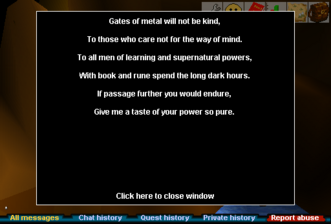 No, I don't want to read that.

You decide not to read the message.

You scour the gate for any more clues...
Something etched into the wall nearby catches your eye...
It looks like a picture of four pillars or constructions.
Over the first pillar is a picture of a cloud...
Over the second pillar are some etched flickering flames...
Over the third pillar is the carved image of a dew drop or a tear...
Over the fourth pillar is the likeness of a ploughed[sic] field...
All of these images are contained within a sphere.
Player: Hmmm, I wonder what they could mean?

The orb shatters with the power of the magic.

The spell works and the gates open.
You magically appear in a different part of the cave system.
It seems that the gate was a test of magical ability.
As soon as you enter this room, you are filled with dread.
In the centre of the room is a large gaping hole.
It goes down a long way...