Blurite rocks are pieces of scenery found in the Asgarnia Ice dungeon which give blurite ore when mined. The rocks require level 10 mining to extract ore from. There only function is within The Knight's Sword quest, and they can be dangerous for lower leveled players to reach for due to nearby ice giants and ice warriors. They are rarely mined because they grant a relatively negligible amount of mining XP and also because there is no known use for blurite ore after the quest has been completed. 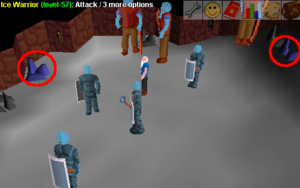 The location of the blurite rocks in the Asgarnia Ice dungeon.