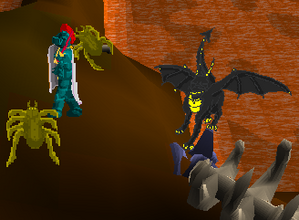 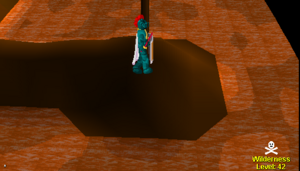 The ladder down from Maze centre is relatively safe.

The Wilderness Lava Maze mine is located in the Lava Maze dungeon at the centre of the maze. It is one of the three mines with Runite rocks, the other two being Wilderness runite mine and Hero's Guild mine.

The player should access the mine properly equipped. Nearby banking locations can be found at the wilderness Mage Arena or in Edgeville. Having a Charged Dragonstone Amulet or runes to teleport makes it faster to leave/bank by walking to level 30 Wilderness and then teleporting away.

To go through Lava Maze player will need a sharp object such as a sword or axe to cut the spider webs along the way to the maze entrance.

Poison Antidotes or Cure poison potions are highly recommended because of the many Poison spiders lurking, and an equipped Anti-Dragon Shield is a necessary precaution due to the fire breathing Black Dragons who roam the mazes interior. Food and Prayer potions are also recommended. Traveling with a trustworthy partner is advisable, as the many monsters here can make moving around the dungeon and leaving very tricky. Mining the nearby runite rocks will prove to be difficult for this reason. Remember that this is still a PKing zone in the wilderness. 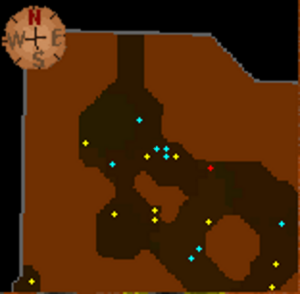 The Runite must be reached through Poison Spiders in the south.