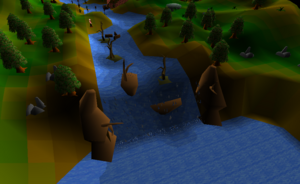 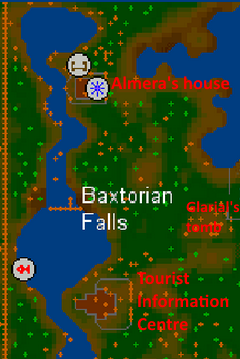 Baxtorian Falls is a waterfall and the surrounding area in northern Kandarin. The Waterfall Quest takes place in this area. It is north of the Combat Training Camp and east of the Tree Gnome Stronghold.

Almera's house and the Tourist Information Centre are found on the eastern side of the river.

Empty decorative rocks can be found all around Baxtorian Falls from near Moss Giants in the south to all the way to the northern border. There are, however, three mining locations with a total of nine Copper rocks. 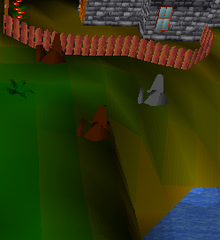 In the south near Tourist Information Centre there are two copper rocks and an empty rock.

In the north between Almera's house and the World Map border there are four copper rocks and two empty ones.

Three more copper rocks can be found from across river west of Almera's house.