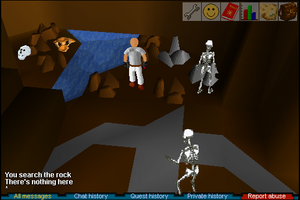 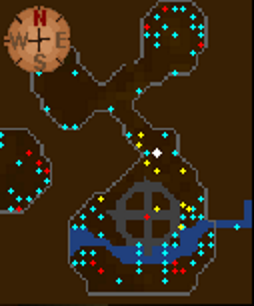 The Digsite dungeon is a small dungeon located underneath the Digsite. It is an ancient temple of Zaros. It can be accessed after the player has worked their way to level 3 sites above and found a Talisman of Zaros in the Digsite quest. The talisman is then given to Archaeological expert who gives player a Permission scroll. When the scroll is given to a Workman they will hold onto it and let the player use winches that lead to Digsite dungeon.

The dungeon is divided into two parts.

The west and smaller part (on the map right) can be accessed by operating the north winch. It requires a new Permission scroll and a rope to once more access this area after the quest has been completed. It contains four Bronze pickaxe spawns, three bucket spawns, two workmen and it is mainly used to beg for the Chest Key during the quest.

Begging for the key during Digsite quest.

The larger part of the dungeon is accessed by operating the western winch. First, the player has access to only northern Arcenia roots. Later on in the quest the blockage is blown with an Explosive compound. This gives access to the ruins of the temple area, stone tablet, mining rocks, skeletons and allows the player to complete the quest.