Black dragons are the strongest type of dragons out of the colours of dragons - blue, red and black. The King Black Dragon is the only dragon that is stronger than black dragons. Black dragons can be found at the end of the Taverley dungeon and also within the wilderness Lava Maze dungeon.

Like all dragons, fighting them using the Paralyze Monster prayer is very helpful as they cannot attack back. Bringing restore prayer potions would be wise to restore prayer points if using this prayer. Even when intending to use prayer players should bring sharks or high healing food to counter the minimal dragonfire damage taken when entering combat, and for emergencies. 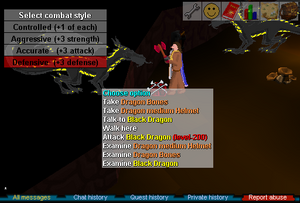 A player receiving a Dragon medium helmet as a drop from a Black Dragon in Taverley Dungeon.