Mine Cart is a scenery object that is found by the Coal Trucks and in the Desert Mining Camp mine. During the Tourist Trap players place Ana in a Barrel into a mine cart in order to help her escape slavery.

The carts between the ends of the Coal Trucks cannot be interacted with and serve as blocks to prevent players from using a bridge.

Players who search the mine cart located in the Desert Mining Camp mine can use it to travel a short distance and will be given the following options and messages:

The north Mine cart in the Desert Mining Camp mine also has a look option. Using it gives the player the following messages: 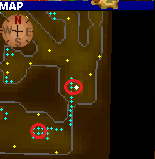 "This mine cart is being loaded up with new rocks and stone.
It gets sent to a different section of the mine for unloading."

The south Mine cart in the Desert Mining Camp mine also has a look option. Using it gives the player the following messages:

"This cart is being unloaded into this section of the mine.
Before being sent back for another load."

Players who attempt to search the cart with Ana in a Barrel in their inventory will get the following message:

"You search the mine cart.
There isn't enough space for both you and Ana in the cart."

Players who use Ana in a Barrel on the cart will get the following messages:

"You carefully place Ana in the barrel into the mine cart.
Soon the cart moves out of sight and then it returns."