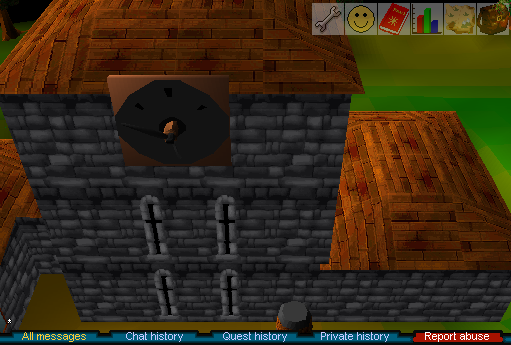 Wallclockface is a piece of scenery in the Clock Tower building and in the Civic Office of West Ardougne. During the Clock Tower quest players are tasked with assisting Brother Kojo in repairing the dysfunctional clock by placing differing colored Large cogs on the Clock poles of a matching colour.

The wallclockface can also be seen in the middle of the ocean as a possible graphical distortion, when standing near the docks of southern Ardougne. Rotating the camera in a particular way and zooming out with a modified client will make this anomaly seem to appear. Although it would have been completely invisible on original clients, it seems there were some errant 2D polygons included in the model of wallclockface, displaced from the rest of the model 48 tiles behind.