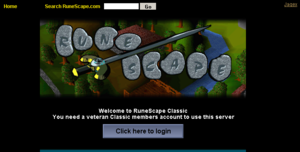 Only veterans could enter World 1.

It was intended to distinguish between original RuneScape Classic players and those who joined during one of the open periods. However, it was a controversial implementation because it restricted veteran status only to those who were a Member and logged in during that 4 month period between 3 August 2005 and 12 January 2006. People who could not become members at the time or just didn't log in to Classic were left out and felt they should also have veteran status.

Although Jagex did have player creation data that would have allowed for players who logged in at least since the introduction of members on 27 February 2002 to be considered veterans, this data was never used. At the time, "player creation date" was considered a security question, and would not be divulged to even the account holder, which may be the reason Jagex did not utilize this data. Toward the end of RSC, this attitude toward "account creation date" changed with the addition of the "Check Age" feature on Hans in OSRS and RS3, but either Jagex didn't consider going back to add veteran status to more members, or they considered it inappropriate.

Players with Veteran status had the ability to log in to World 1. This meant one more world to collect resources on, a place to retreat from players who were not veterans, and bragging rights.