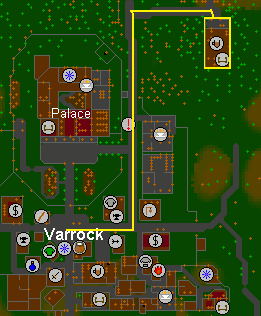 The path to Jolly Boar Inn from Varrock.

To start the quest, talk to Morgan in Draynor Village. He will want you to kill a vampire that has been terrorizing the village. However, he first wants you to talk to his friend, Doctor Harlow, a retired vampire hunter. Doctor Harlow is located in the Jolly Boar Inn, a small inn located northeast of Varrock at the edge of the Wilderness. However, before you do so, go to the second floor in Morgan's house and search the cupboard to find a clove of garlic.

Once you're at the inn, buy a beer from the bartender, and then talk to Doctor Harlow. Tell him Morgan needs his help, and he will want a beer. Give him the beer, and another one if he still won't provide any information, and then he will then tell you that you require a hammer and a stake to kill a vampire. He will give you a stake, while you will be required to get a hammer yourself. You may purchase one from a general store. 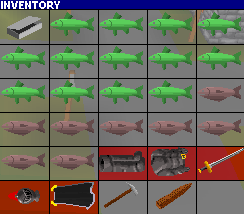 A decent inventory for Vampire Slayer.

Armed with garlic, a stake, and a hammer, you are now able to kill the level 43 vampire Count Draynor. Before going to Draynor Manor to kill him, get prepared. You will want a decent weapon (a Steel Longsword or better is recommended), decent armour (iron or better), some food, and your hammer, stake, and garlic. A Defense-boosting Prayer such as Thick skin may also help your chance of success. A combat level of at least 10 is advised.

Now that you are ready, head to Draynor Manor, north of Draynor Village. Enter through the doors and go to the large stairs in the large eastern room. Go down the stairs to the basement. Search the coffin and Count Draynor will appear. Fight him, and when his Hits are very low, either use the stake on him or equip the stake as a weapon. If not done correctly, the vampire will regenerate his health.

If successful You will drive the stake into him with the hammer and he will die, saving the people of Draynor Village and completing the quest.