Why are you de-capitalising the word "Infobox" on every item page? There's no rule saying you have to (the actual name of the template is "Infobox item"), and every page previously had it capitalised, so it's not doing anything for consistency. S (talk) 14:14, May 11, 2016 (UTC)

It was not intentional de-capitalisation, I was just basing myself on the usage from Template:Infobox item and more than just decapitalising I reordered for readability/add information. Saying that Infobox should be capitalised, I'll be capitalising them again (if needed, though some were de-capitalised before). Please update the usage example before mentioned. Luis12345lts (talk) 01:12, May 12, 2016 (UTC)

That makes sense, thanks. I agree with the reordering, I do it myself when I edit pages. I'll edit the documentation. For future reference, Cook Me Plox added many item pages programmatically so I think the style used by Cook Me Plox should be used as the convention. Note that "gp" also isn't present in the alch data, although many people keep adding it. S (talk) 22:17, May 14, 2016 (UTC)

Thanks for uploading some of the bubbles images. However, some are quite blurry in comparison such as File:Closet key bubble.png. Can you please retake the ones that are blurry? --Jlun2 (talk) 04:22, May 26, 2018 (UTC)

I know that it was very probable that I make mistake during the categorization process, therfore I don't have much idea what is the same post-quest and during quest. If you are planning to add more (wich I am assuming you do) then indicate clearly wich are the same. As of right now, I am trying to do it somewhat quick as I will soon prepare a catalyst of information and guidelines [regarding preservation project] wich should hopefully lead to more contribution, thus gaining time in the grand schemes of things if pages are rightfully categorized. I won't personally check for issues in the current momentum, so feel free to correct me. 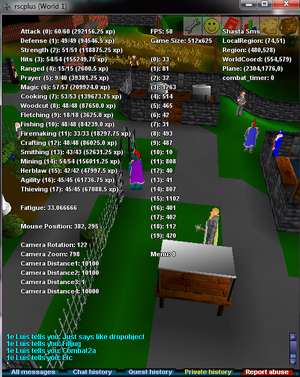 More likely than not it was a transcription error. Seeing as I wrote the note that the text is the same during and after and I get the current corrected version of the dialogue after the quest currently. While I was transferring text from notepad I may have overrid that line or while applying the name headers overrid the line.

I did write notes at the bottom of my transcripts alerting me of simularities such as this case. So when I did write them up I would not forget.

Regarding account age that is not something I would entertain in classic. Records were not kept till after membership was a thing (The quest came out before membership). So I doubt strongly that they would go back to the quest code and write new flags to add or remove text based upon account age.

But good eye on you. There certainly are examples of text changing in dialogues, especially within the same dialogue tree... funny how they can write a reply once right and then when a dialogue takes another path to the same dialogue it has mispellings or misformatting, or dropped lines...   Shasta Sms (talk) 11:37, June 10, 2018 (UTC)

Yes, that image in question is accurate. Addtionally, the telescope page has a listing for constellations as well if you are interested in ensuring that is up the board as well.

I just so happened to have spare ingrediants. I did not get a new bubble when I used the nitro on the power. The bubble was still the power.

I got this on the last day, I thought you might appreciate it. 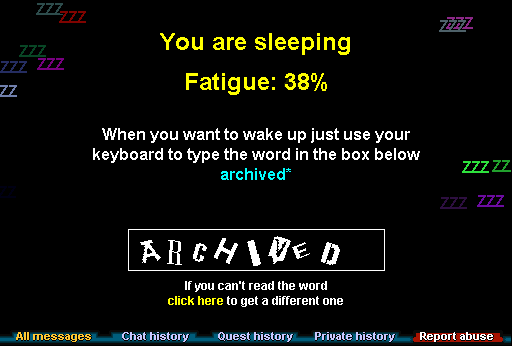 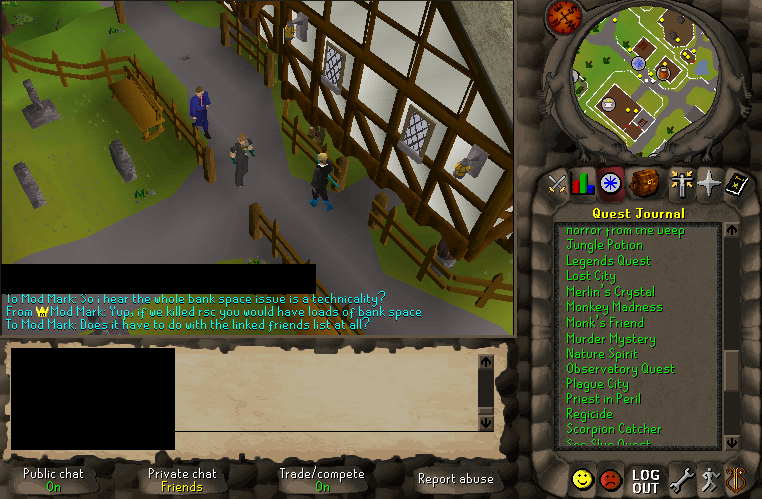 If I am understanding what you are trying to convey: You found at least 4 versions of the manual in which there have been changes over those versions that do not nessarily range of course all articles.

As far as conveying the various verisons I see 2 solutions:

1. Only one article per article with them being segmented by date/version.

Yeah that is probably version 1, too bad that that archive is fairly broken. But it does provided some insight especially as to how it was structured initially. Shasta Sms (talk) 20:45, August 23, 2018 (UTC)

So I ran into this guy [416] who said that there was an item Red briefcase or simply a Briefcase coloured red in circa 2001 RS that could be opened and a note would be read that would produce the following dialogue in the chat, "There are camels in the dessert".

Now I think he is either highly confused, playing on a private server, or just making stuff up. But he swears it was real and that he was scammed out of full rune in exchange for the item.

Anyway, could you humor me and at your leisure look at the game files or what have you to settle this.

That is a funny thought that it would disappear or allow a player to break bounds. Anyway I have removed the image I put up to reduce confusion.

P.S. I have decided instead of per say going for a weekly Did you know. I will go for a revolving gallery like featured images has. Though I will plug in interesting things as I see fit. With the goal of adding at least one a week.

Playing around with the Bubble page in my Sandbox. I think a table would work fine to display the data. Only issue that I have is that the columns are not well defined by say a solid line. Thoughts? Shasta Sms (talk) 21:54, August 30, 2018 (UTC)

So while looking at some Jagex archives I started running into update continuity issues. Namely that the updates on the Jagex website are not only more verbose but there are updates simply not on the RuneScape news archives.

I suppose the best course of action is to create a new template header and apply that to existing pages that have any differences immediately after the Runescape article.

This official news post is copyrighted by Jagex. It is copied verbatim from the Jagex website.
This update dates to [[{{{date}}} ]] [[]].

So the plot thickens. I found an archive of the www.runescape.co.uk/runescape.html site and it shows the verbose updates identically to the ones found on the Jagex site. This leads me to believe that the RuneScape news archive is not only incomplete but additionally altered. In perhaps a very odd method of saving server space. Shasta Sms (talk) 01:36, September 5, 2018 (UTC)

For the life of me I yet again cannot find the location of the gif dump of the RS2 beta monsters/NPCs. Looking at the source code there were different images used on the Runescape website (modern day) than the Jagex website circa 2002. If you happen to know what I'm talking about and can send me a link I would appreciate it.

So now I'm finding updates on the Runescape (modern site) that are not found on the 2002 archives. Sooo... at this point I am just going to consider the sites two separate matters and not a matter of copy and paste between the sites. Shasta Sms (talk) 02:03, September 5, 2018 (UTC)

Thank you! That is the right idea, but none of them match up with what the source calls for: "

". Though I cannot say I rightfully recall ever seeing that gif.

As far as getting the other Beta animations, no thanks. Just wanted the one to complete the article more so than my personal curiousity.

I saw you added some update articles, be advised there are some duplicate articles floating around. In short steming from the different naming conventions found in the internet archives and archives maintained on the current RS website. I plan at some point combining any I see (So far I know of at least one case). I think the winning article naming convention will be the one used on modern day RS archives with the addtion of the date afterward: Mage Arena (Date released) Shasta Sms (talk) 18:48, September 5, 2018 (UTC)

Just as a FYI, DO NOT post the update that details the death of a player. That update was removed from the site due to a request received by Fandom staff from the family of said player.

Since we are both going through updates, just want to make sure you are aware of that situation Shasta Sms (talk) 16:24, September 6, 2018 (UTC)

I think you are correct in thinking it is Report Abuse. Looking at an RS2 archive it references the Reporting Abuse article as "Dealing with disruptive players."

Honestly, the manual template should be changed. Currently it contains the manual through various revisions. Which, simply said is a bit messy. I think perhaps crating a template per era of the manual with the first row of each template routing to the other manual templates would be most appropriate. I believe for the most part, update posts were made that delineated major manual and website changes, to establish firm timelines. Alternatively could try and do a template with subgroups. I did try and look into what we need to add to the site to implement it though, and did not manage to see how or what needs to be added. Shasta Sms (talk) 05:05, September 9, 2018 (UTC)

Points of clarification: Nothing means, you have no information I take it?

Hmm do you think switch boxes would be flexable enough to be used in a template?

As far as establishing eras or revisions of the manual I think to ease the matter we should focus just to major overhauls of the structure of the manual or when lots of materials changed. Would likely be best if we could voice chat over this matter since it has a lot of moving parts. We could use discord or something of the like. Shasta Sms (talk) 11:56, September 12, 2018 (UTC)