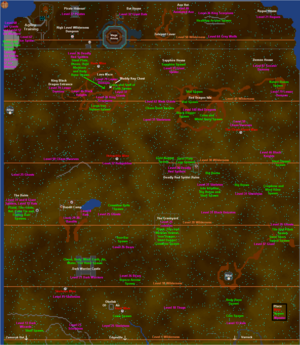 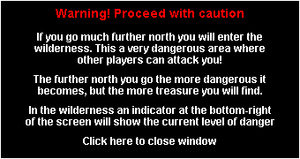 Warning given to players when entering.

The Wilderness is a barren wasteland which covers northern Gielinor. It is the result of a 4,000 year long war known as the God Wars. Inside the Wilderness, players can attack each other if they're deep enough. Inside the Wilderness, there will be a number on the corner of your screen, if that number is the difference between you and someone else, you can be attacked by them in that area.

It is advised to only bring what you can risk losing into the Wilderness. Keep in mind that teleporting is prohibited beyond level 20 Wilderness, with the exception of the Charged Dragonstone Amulet which allows teleporting from up to level 29 Wilderness.

The Wilderness border can be crossed on foot from northern regions of Misthalin and Asgarnia. The border areas are: Chaos Temple and Goblin Village, Black Knights' Fortress, Edgeville, northern Varrock and Lumber Mill. Edgeville is the most used location due to very close bank and direct teleport there via Charged Dragonstone Amulet.

Locations in the Wilderness[edit | edit source] 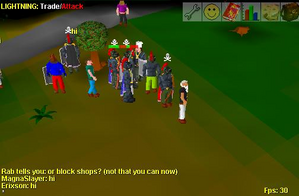 PKing before the Wilderness was added to RuneScape
Retrieved from ‘https://classic.runescape.wiki/w/Wilderness?oldid=125673’
Categories: