Tattered scroll is an item found during the Shilo Village quest. After the quest is completed, players can sell it for 100 coins to Yanni, who is found on the south side of the river which is flowing through Shilo Village.

When the player selects read it prompts:
This looks like part of a scroll about someone called Berverius..
Would you like to read it?

2 dialogue choices are presented in the upper left hand corner just like when speaking with an NPC. The choices are as follows: 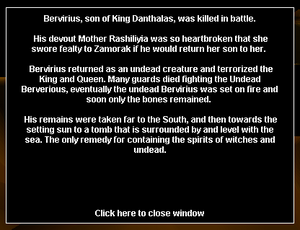 This looks quite important, are you sure you want to drop it?

As you drop the item, it falls down a narrow crevice.

The Tattered Scroll is a blue colored variant of the Bervirius Tomb Notes, Crumpled Scroll, message, and flier. There are other items which also use this visual.