It may not accurately reflect the last version of RS Classic.
Target 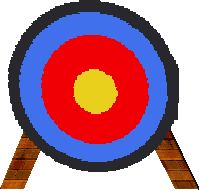 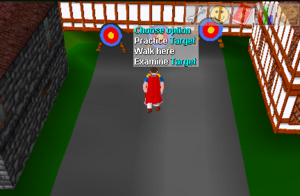 The three targets as they appeared in early 2001.

On 11 June 2001[1] the 3 targets that used to be featured in Varrock were removed from the game. It's not known why the idea was not implemented, but there would have been a couple technical hurdles that could have stopped it.

In order for the concept to work, the way that projectiles are fired would have had to have been augmented since there is no way to fire a projectile at scenery. It would have also been likely necessary to augment the way that players are able to interact with scenery, since all other scenery in the game requires the player to be standing right next to the scenery in order to activate it.

Although the target was never implemented in RuneScape Classic, Jagex continued to show interest in the concept of Ranged training without combat.