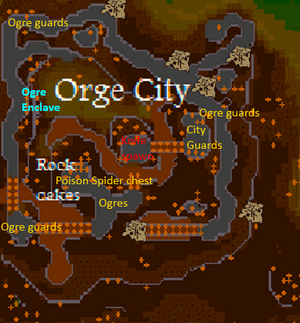 Skavid caves are six small caves scattered around and in Gu'Tanoth. The caves are inhabitated by skavid creatures. During Watchtower quest player obtains Skavid map from City Guards of Gu'Tanoth. Without the map player wanders (i.e. teleports) between five northern cave entrances.

A lit candle is also required in the caves. If player enter the caves without lit candle they'll end up in the dark section and they'll have to seach rock to find a way out. 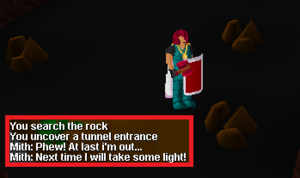 Searching rocks in the dark area of Skavid caves.

This cave is closest to west entrance of Yanille. 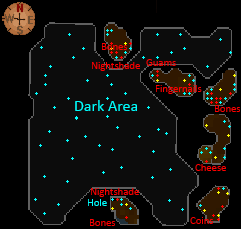 Map of the caves

This cave is outside the city and southeast of Yanille doors.

This cave is located in the slope of the city entrance.

This cave is located very close to Gu'Tanoth entrance, just south of the last cave and near Ogre guards and a gate.

This cave is outside the city, near Gorads and Tobans island. 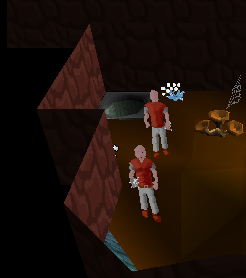 Shortcut to Yanille in the southernmost cave

This cave is the southernmost one and it is not part of the caves "cycled" when travelling without a map. Entering the south gate to lava bridge leading to the entrance requires fair amount of Watchtower quest to be done.