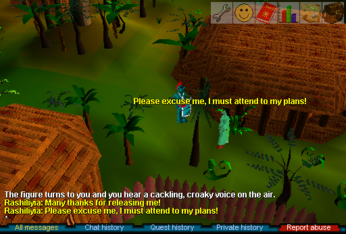 Rashiliya Corpse is an item obtained during the Shilo village quest, and is the corpse of the ancient evil sorceress Rashiliyia. It is found by searching the Tomb Dolmen in Rashiliyia's Tomb, after defeating three of Rashiliyia's Nazastarool minions. Players who drop the corpse must once again enter her tomb and search the Dolmen. However, they will not have to fight the three minions again. The quest is completed after Rashiliya Corpse is buried in the Tomb of Bervirius on Cairn Isle.

"The remains of Rashiliyia look quite delicate.
You sense that a spirit needs to be put to rest.
Are you sure that you want to drop the remains ?[sic]

You drop Rashiliyias remains on the ground.
The bones turn to dust and forms into the shape of a human figure.
The figure turns to you and you hear a cackling, croaky voice on the air.
Rashiliyia: Many thanks for releasing me!
Rashiliyia: Please excuse me, I must attend to my plans!
The figure turns and soars away quickly disapearing[sic] into the distance.

No, I'll keep hold of the remains.

You decide to keep hold of Rashiliyias remains."