From RuneScape Classic Wiki
Jump to navigation Jump to search
The Old School RuneScape Wiki also has an article on: osrsw:Portrait_(scenery)#King_(gilded_frame)
Portrait 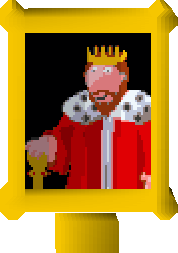 Portraits are decorative scenery found on some walls. The portrait is a painting of a king wearing a crown and red robe with a white and black-spotted fur collar. He is holding a golden sceptre. There is no way to interact with the portrait other than to examine it.

Given the portrait's initial locations in the game being mostly in Varrock, it would be reasonable to assume it is a portrait of the King of Varrock. However, it's worth noting that the King in the portrait has brown hair and a beard. King Roald the VIII would not sport a beard in-game until his graphical redesign on 27 March 2007, in RuneScape 2. Also, King Roald has black hair in RuneScape Classic, not brown hair. However, the counterpart of this portrait created for the release of RuneScape 2 does strongly resemble King Roald's initial design in RuneScape 2.

The examine text refers to the portrait as being of "our beloved king", which would typically mean the current king. But being found all over RuneScape, the most accurate statement may be that this portrait is not of any particular king at all. If more detail were available, it may have appeared to be a different king's portrait hanging in each location.

There are 20 portraits of the King in RuneScape Classic:

A portrait and player clipping through one another