Before starting the quest, the player should purchase a White Apron from Thessalia's Fine Clothes in Varrock and get a Spade from the house north of the park or on the ground floor of Draynor Manor. In order to officially start the quest, dialogue with Redbeard Frank in The Rusty Anchor in Port Sarim must be initiated. The play must then tell the old pirate that they are in search of treasure, fully allowing the resulting dialogue to progress and end. Redbeard Frank says that he knows where some is and that he can tell you where it is located for the price of some Karamja Rum. However, Karamja Rum may not be freely taken off of the island of Karamja via ship to Port Sarim or Ardougne, making his request a bit tough to pull off. 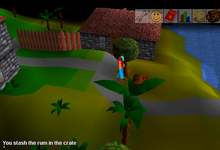 The player may then sail to Karamja by speaking with Captain Tobias or Seaman Thresnor and asking to sail to Karamja which costs 30 coins. Just west from the docks is Zambo's liquor store where the player may purchase Karamja Rum for 30 coins each. This rum may not be traded with other players and only one rum is needed to complete the quest, and it must be hidden with a shipment of bananas, in the crate to the east in order to get it back to Frank.

The player may immediately use the rum with the crate, resulting in the following message being displayed: You stash the rum in the crate

In order for the crate to be sent to the mainland, it must first be filled with 10 bananas. In order to do this the player must first talk to Luthas who may be found in his house just north east of Zambo's liquor store, and ask him for employment. Attempting to store bananas before speaking to Luthas and attempting to store a second rum produces the message: I have no reason to do that

After becoming Luthas employee it is possible for the player to fill the crate. The nearby plantation of Banana trees nearby provides an immediate source. Use 10 bananas on the crate. Attempting to store an 11th banana in the crate will result in the message: The crate is already full

When the crate is full a dialogue with Luthas must be initiated in order to have the crate shipped. It is now possible for the player to safely teleport back to the mainland or to travel by speaking to the Customs Officer and sailing back to Port Sarim.

The player may now obtain the rum they have smuggled. The shipment of bananas was shipped to Wydin's Food Store near the Port Sarim docks . When the player attempts to open the closed door on the ground floor interior of the grocery store Wydin will say that only employees are allowed to enter that back room. When asked by the player if they may be employed, he will agree and hire them so long as they have a White Apron in their inventory. Once they have been hired they may enter the back room and search the crate to retrieve the bottle of Karamja Rum. 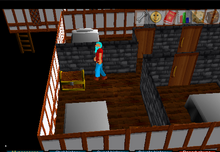 Speaking with Redbeard Frank will remove the rum from the players inventory. He then tells the story of One Eyed Hector, a pirate captain who became very rich but was killed by the Asgarnian Navy. Redbeard Frank gives the player the Chest key to One Eyed Hector's chest which may be found in a room on the upper floor of the Blue Moon Inn in Varrock.

When you arrive at the Blue Moon Inn, go to the first floor and use the Chest Key on the chest in the southwestern room. Opening the chest results in the following message being displayed:

The park in reference is Falador Park, where the player must travel to in order to complete the quest. 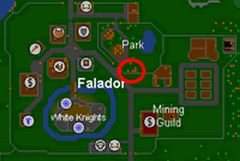 The location of the treasure

At the park, behind the southern bench there are two sets of flowers. Right click and use the spade on either set of the flowers and you will dig up a little bag of treasure, completing the quest.

Note that Wyson The Gardener will become aggressive and attack the player if he catches them digging up his flowers to get to the treasure. He does not have to be killed if another player is distracting him by talking to him. He may pose a small challenge for new players, but is overall a very weak enemy. Killing him grants 27 strength XP and 9 hitpoints XP. After the quest has been completed it is impossible to fight Wyson again.