The Monastery is a guild dedicated to the prayer skill that is located east of Ice Mountain and west of Edgeville. The monastery is built of stone and many stained glass windows, consists of two floors and is a very holy place, home to many monks.

The monastery proves to very useful for players training on monks as they can quickly be healed by speaking to Abbot Langley. It is also a popular place to visit from PKers as it is located close to the wilderness and they are easily able to restore their hits and prayer points.

Accessed by a ladder on the eastern ground floor, the upper floor of the monastery is only accessible to players who have a prayer level of at least 31. When first asking to join, the player must also have at least 31 prayer points remaining. Attempting to climb the ladder will initiate a dialogue with Abbot Langley if you have not yet joined the monks order. On the upper floor there is an altar which players can use to restore their prayer points. This altar is unique because it restores the players prayer points but also gives a +2 prayer point bonus when recharging on it. The upper floor also has a spawn of monk's robes.

The NPC Brother Jered can bless a players Unblessed Holy Symbol into a Holy Symbol of Saradomin which provides players to boosts to the prayer equipment stat, this slows the drain rate of all prayers when they are being used. 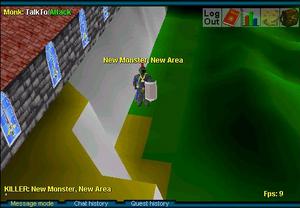 Monastery with only a ground floor

Although the monastery was released on 6 April 2001 it was not until 12 July 2001 that a 1st floor[UK]2nd floor[US] was added, and only players with at least 31 prayer could access.