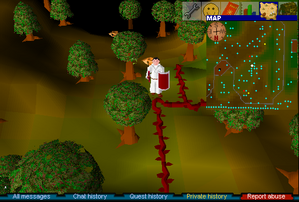 McGrubor's Wood is a fenced off location in the northern part of the Kingdom of Kandarin. The woods can be entered through Fence with loose pannels to the east because southern gate is guarded by Foresters, who will not allow you to enter. McGrubors wood cannot be exited via the gate either.

The area contains vines with red worms and dwellberries, items which are used in the Fishing Contest and Biohazard quests respectively. It also contains aggressive guard dogs.

Brother Galahad lives in a small house west of the woods.