Lord hazeel is a monster and noted Mahjarrat. In The Hazeel Cult quest the player is given the option to join the cult lead by Alomone, and return him to power, or to opportunity to destroy the cult.

In his speech he tells the cult members that he never expected to be resurrected, but can see that there is now much work to be done. He assures the cultists that in time they will be rewarded for their actions which led to his return. He specifically addresses the player, as "adventurer", and credits him with completing the most important work in returning him to this world. He also implies to the player that he is indifferent as to which God the players faith is placed in, stating that even if you aren't a follower of "the great zamorak[sic]" you have a noteworthy understanding of injustices and anger. He swears to call on the player for assistance in the future, and speaks of his followers who are steadily gaining power. The player then tells Lord hazeel that they fight for themself only, to which he responds with temporary ambivalence. He says he will reward the player with money, but that Zamorak's approval of you is the true gift. He then excuses himself, explaining that he must go north to his "brothers", offering a dire warning about bloodshed in Gielinor before finally leaving. 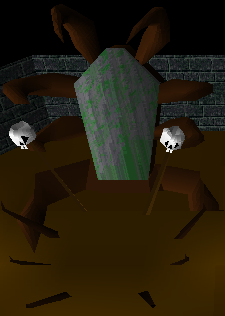 Lord hazeels true form as a Mahjarrat is never seen. However he is witnessed by the player as wearing a cape (black), Large Black Helmet and a Black Plate Mail Body with Black platelegs. He appears to be wielding a black sword of some sort, and is holding either a Black Kite Shield or Black Square Shield. According to his examine description, he could do with some sun". This either means that beneath his helmets visor he has a light vampire like skin tone, or that to the onlooker, darkness seems to surround him. Mahjarrat are able to take many forms including the form of a human being, but look much different from humans whilst in their own native body. He has the appearance of a Black Knight and wears their armor but is never associated with their order, although both hazeel and the Black Knights are associated with Zamorak. It is assumed that his appearance in RuneScape Classic is an impostor human form.

Lord hazeel cannot be fought or killed and thus has no drops.