Lever is a piece of scenery found in many dungeons.

When pulled at the Teleport house:

"warning pulling this lever will teleport you deep into the wilderness
Are you sure you wish to pull it?

you pull the lever

you pull the lever"

Pulling the lever at the Deserted keep will not give players any messages.

Examine: It's a lever

If players do not 'Searchfortraps' They will take damage and receive the message:

"You have activated a trap on the lever"

Players who do 'Searchfortraps' will get the following messages and be allowed to pull the lever:

Pulling the level gives the player the following messages:

Also in the Temple of Ikov Dungeon is a Lever Bracket that must be repaired by using the item Lever on it. Repairing it turns it into a lever with the Examine: It's a lever 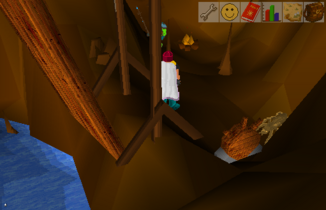 Visually different levers can be found in the Underground Pass. First one is near Old bridge and the second by the grill puzzle. 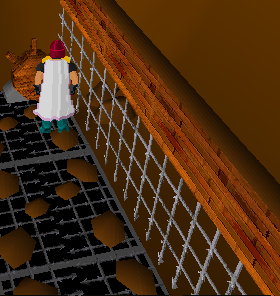 Cage and Lever by the grills

Pulling the lever next to the Old bridge:

Pulling the lever next to the Cage:

The lever on the top floor of the Watchtower is used to active a magic shield to protect the town of Yanille from the nearby Ogres.

Before shield is activated

After shield is activated

Not having placed all the Powering crystals:

"You pull the lever
It had no effect"

Having placed all the Powering crystals:

"You pull the lever
The magic forcefield[sic] activates"

Trying to pull the lever after the quest:

"You pull the lever
It had no effect"

Trying to pull the lever after the quest and some condition:

"The lever is stuck in the down position"