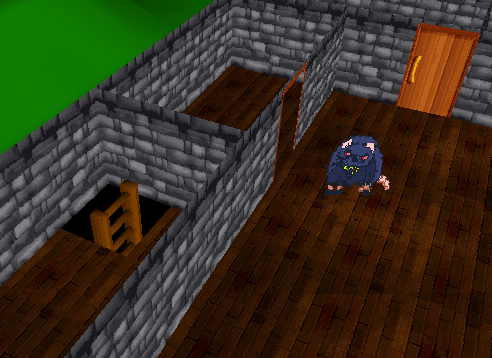 A possible reason for this ladder's existence was provided by Rab, who recalls asking Andrew Gower if he could "make a ladder that was only one way, like could only be climbed down [...] for Melzar's maze."[4] It should be noted, however, that there are several other one-way ladders in Melzar's Maze, (both up and down) and they just use regular ladders. A possible explanation is that initially, the map editor for RuneScape could only place regular ladders in pairs, and then part way through development of Melzar's Maze, it was augmented to be able to place individual ladders. The special one-way ladder developed by Rab that this article is about then would have been left in the Maze as a relic.