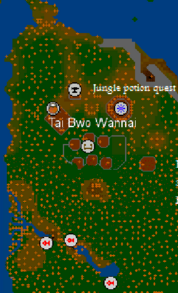 Talk to Trufitus Shakaya in Tai Bwo Wannai Village. Ask him "What does Bwana mean?" and then tell him you come in peace to trigger the quest. He will ask you to find special herbs so that he can commune with the gods.

Each herb appears on the ground and will need to be picked up manually. You must go back to Trufitus after getting each herb. You cannot skip this step and try to gather several at once, as you cannot even try to gather a herb until Trufitus tells you about it. 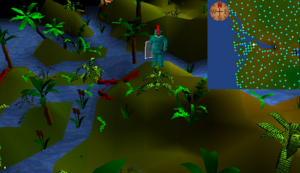 First, he will tell you to collect Snake Weed. It grows south-west of the village. Search a red Jungle Vine and it will appear on the ground.

Identify the herb as Snake Weed, and then return it to Trufitus. 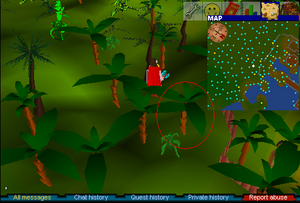 Trufitus will tell you to find Ardrigal. The clue given is to head east toward the PalmTrees. Search the palms in front of the gate to the ship yard.

Be prepared for aggressive Jungle Spiders (level-47), however, they can usually be avoided.

Identify the herb as Ardrigal, and then return it to Trufitus.

Trufitus will tell you to find Sito Foil. Search the Scorched Earth directly south of the village.

Identify the herb as Sito Foil, and then return it to Trufitus.

Trufitus will tell you to find volencia moss. Go south-east from where you are until you find a mine. Search the north-western rock in the mine to find the herb, then clean it.

Return to Trufitus and give him the herb. 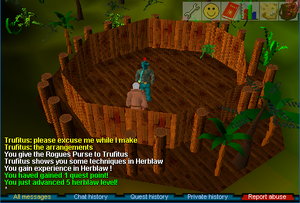 Trufitus will tell you to find Rogues Purse. The herb is in the Jogre dungeon, north-east along the coast. Climb down the ladder there and enter the cave.On the far east wall, search a cavern wall with green spots (fungus covered wall) to find the herb. Clean the herb. (The Jogres can drop Rogues Purse, but Trufitus will not accept one of these). To exit the dungeon, climb up the rocks where you entered it.

Bring the final herb to Trufitus to finish the quest.