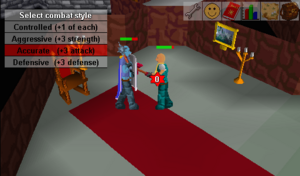 Players wishing to reach the Ice Queen will need to successfully complete the maze leading to her throne room. The maze is located on and below the White Wolf Mountain.

The following are required to reach the queen: 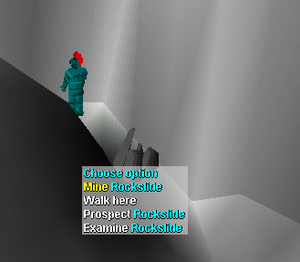 A pile of rocks blocks your path

First, head to the White Wolf Mountain and walk west along the north-most cliff which is just north of the gnome glider. You'll find a rockslide which you'll need a pickaxe (and mining level 50) to mine through. Walk a few steps west then north and the follow the cliff along east until you reach the first set of three ladders. The correct ladder to climb down is the north-most ladder. 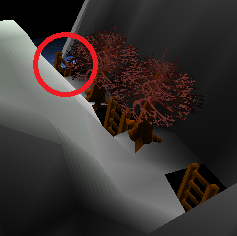 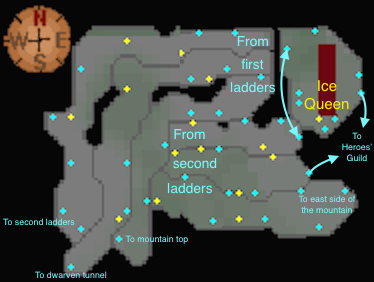 This ladder leads to a room with 3 Ice warriors. Follow the corridor west and then south and at the end of the room there's a ladder which leads to a secluded segment of the mountain with 2 Ice Giants. Of this second set of ladders, choose the north-most ladder again, highlighted here: 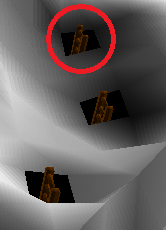 This ladder leads to a room containing 1 Ice spider. The ladder at the end of this room leads to another secluded area on the mountain, out of reach of any aggressive NPCs. Climb down the ladder a few steps north and you'll find yourself in the Ice Queen's room.

Once the player has finished in the Queen's room, there is a ladder in the south east part of the room which leads to a grassy area along the west cliff of the mountain and west of Heroe's Guild.

At the first set of ladders, the middle ladder surrounded by two dead trees leads to a corridor with 2 Ice warriors. At the end of this room is a ladder which leads to the Catherby side of the dwarf tunnel accessible after completing Fishing Contest.

Climbing down the south-most ladder at the first set of ladders leads to a corridor with 2 Ice warriors. At the end of this room is a ladder which leads to the middle of the White Wolf Mountain.

Climbing down the south-most ladder at the second set of ladders will bring a player into a corridor with 3 Ice spiders. The ladder at the end of this room will lead to an area just east of the Mountain, west of Hero's Guild.

Choosing the middle of the three ladders at the second set of ladders will lead a player into a corrider with 2 Ice spiders. At the end of this room a ladder can be found which leads to the east side of the mountain north of the Pack leader wolves.