For training this skill, see the Herblore training article.

Herblaw (known as Herblore in RuneScape 2) is a skill in RuneScape Classic that allows players to make potions. Potions have a variety of effects, including curing poison, temporarily raising or restoring certain skills, or poisoning weapons. Potion boosts will generally allow players to perform certain feats that would otherwise require a few levels higher to do so. However, some quests' skill requirements do not allow boosts to be used.

Getting started in Herblaw requires completion of the Druidic Ritual quest, which will raise the player's Herblaw level to 3 (the level required to make the first potion). It is usually impossible to start Herblaw without completing this quest.

Herbs are a lot less common in Classic than they are in RuneScape 2. The best way to obtain herbs is from monster drops. Chaos druids, chaos druid warriors and men are great for obtaining herbs as they drop them frequently. Another option is to buy the herbs off of other players. Usually, larger amounts of herbs can be found for sale on the forums, but players will also sell them in banks (especially Draynor) on occasion. Players can trade both identified and unidentified herbs.

When herbs are first obtained as drops from monsters, they are unidentified. Unidentified herbs stack in your bank according to their type. In order to be able to use these herbs to make potions, a player must identify what the herb is by clicking on it in the inventory screen. Different herbs require different levels to identify. 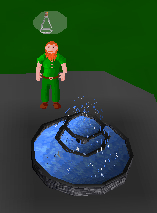 A player filling a vial with visible bubble.

Audio of a player making potions

Making a potion requires a vial filled with water, a herb, and a secondary ingredient. Vials can be made using the Crafting skill, or bought from the Taverley herb shop. Water can be added to an empty vial by using it on a sink, fountain, or other water sources. Vials already containing water are sold by Kortan in his East Ardougne general store, allowing players to save time. Secondary ingredients vary widely. Secondary ingredients may be found in shops, as a spawn, or obtained through monster drops. See below for level requirements.

Each potion requires an additional ingredient after a herb is added in order to complete it. These ingredients are obtained in various ways throughout RuneScape Classic.

Some Herblaw supplies can be exchanged for certificates. Sidney Smith, in Yanille, will exchange the following certificates for Herblaw items (and vice versa):