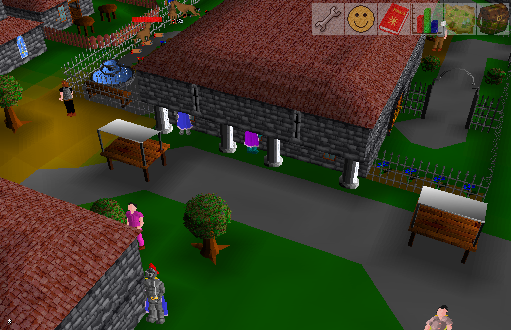 Handelmort mansion is located north of East Ardougne. The Tourist guide reveals to that the owner of the mansion is Lord Franis Bradley Handelmort. The lord employs Horacio to tend to his gardens.

Outside of the mansion are Guard dogs that are frequently used by players to train Magic or Ranged due to the dogs being behind a Fence. The only way to access the mansion is via Wizard Cromperty after players have switched the Address Labels of a Crate during the Tribal Totem quest. On the first floor, is the chest that contains the Tribal totem, which is the primary purpose of the mansion.

The ground floor[UK]1st floor[US] is relatively plain, containing little decoration. The door east of the crate cannot be opened. However, the north door can be opened if players enter the combination (BRAD). The north most door may be freely opened and it leads outside to the fountains and Guard dogs. The west-most door can be opened if a player picklocks it. Players who wish to go up the stairs must first search it for traps. Failure to do so will result in the player taking damage. 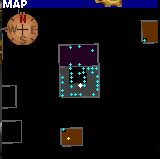 The 1st floor[UK]2nd floor[US] houses various treasures that the Lord has collected. The floor contains:

While it is not an actual basement, if players use the ladder on the first floor of the mansion that is located in the room with the crate it will take players into the Ardougne sewers 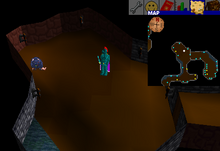