This issue of God letters is copyrighted by Jagex. It is copied verbatim from the RuneScape website.
This update dates to 11 December 2002.

When you up-date the new graphics system will I be able to tell what weapon I'm using with out going to the inventory. Because when I'm out in the wild pking it's good to tell a rune long from a rune 2-h, or a hachet[sic] from a battle axe. 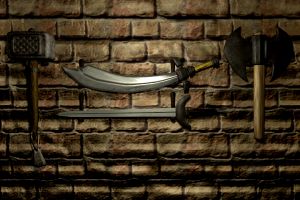 Yes, it's always nice to know what weapon you're using when you're mashing it into somebody's skull. Just promise me that said skulls belong to nasty Zamorakian fiends who thoroughly deserve such treatment. And even then, I don't entirely approve. But to answer your question, yes, after the update you will indeed be able to make this visual distinction. So you won't feel like some novice who can't tell his axe from his elbow.

Can't there be a training spot for ranged attacks? Because I can't find a fast spawningpoint[sic] for rats. 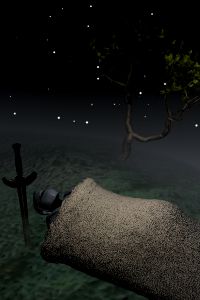 Such a training spot does exist! But first you must complete the Biohazard quest- and it's a biggie. So in other words, you must work hard in order to gain the right to train harder. A little puritanical perhaps, but there you go.

There have been some rumours going around lately about "sleeping bags," and the convenience of not needing to rest on a bed when fatigue is high. Of course I do not believe what everyone is saying, and I just wanted to confirm that sleeping bags do not,in fact, exist in the world of Runescape.

I am happy to announce that sleeping bags are indeed the stuff of myths. After going to all that trouble to make beds work, we couldn't very well just let you miners crash out next to the rocks- that would take us back to square one! And I think it's nice to walk back home for a well-earned rest.

As you know, the holidays are coming up and me and other fellow Runescapers want to know what we can expect to happen over the holidays.

Well, everyone stop working for a few days, and the population of turkeys takes a sharp nosedive. Is that what you meant? Oh yes, and people have been known to receive nice gifts, which appear seemingly at random on a certain day of the year. But only if you're good, of course. 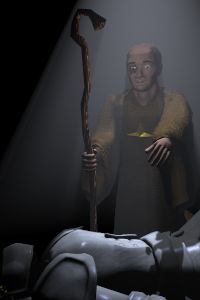 I was defeating some black knights far away in the mountains, and after a few hours I got pretty bashed up. So I went to get cured by some nice Monks who just happened to be around the corner. I accidently[sic] clicked on one and started to kill him. I reduced him to very low health and stopped, he didn't want to continue, so I talked to him, then he said, Yes, I will cure you. Why do monks cure you after you kick the living daylights out of them?

For all my omniscience, I am somewhat taken aback at how you can accidentally start to kill someone. And I imagine that the monk was a little startled as well. But they are a forgiving bunch, which is why they don't mind healing you after you beat them up. Just try not to give them a complete pasting- they're bound to run out of antiseptic cream eventually.

Until next time my friends,