This issue of God letters is copyrighted by Jagex. It is copied verbatim from the RuneScape website.
This update dates to 18 October 2002.

A warm welcome to one and all,

And so it is that time again when I respond to your many questions regarding this wonderful land of ours. The good god of Runescape has been feeling a bit under the weather this week, so I'll cut to the chase.

Greetings great Saradomin. I am a great worshipper amongst you. You have made this world beautiful and as great as can be. However, there are many people that do not follow your religion. This is due to the large lack of people who bury bones. The world of Runescape needs a new bone, that will draw them ever closer to your spirituality. The solution to this, is dragon bones. As you know, dragons are the most grand of all foes in Runescape. Few warriors are able to slay these beasts of almighty power. But those who do should be especially awarded with dragon bones. With dragon bones your number of worshippers will increase beyond believe! And the evil powers of your brother Zamorak shall not stand a chance against the holy spiritual powers on the plane of Runescape. Please Saradomin, the fate of Runescape can not fall into Zamorak's hands.

Hmm... Zamorak's not that bad you know - actually he's worse! But he is still my brother, even if he can't be bothered to keep in touch these days. I do agree about the bones though. This was a popular request, and I can tell you that they should be available within the next week! So consider your prayers answered, and get on down to your nearest dragon.

After hitting big bars of metal all day with my trusty hammer, i suddenly thought: "I wish i could wack someone over the head with this". Then an idea came to me. Why not create mighty war-hammers to blight thy enemies with. Higher power than axes and even less aim....wow. The different metals could all be used to make them and I think they would be a welcome new weapon to all us rune -scapers out there on the battlefields. Your faithfull warrior, 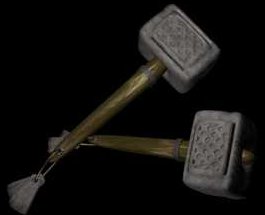 Well it's good to see such enthusiasm for one's work. But I'm afraid that your desires are not aligned with the greater scheme of things- we're trying to expand people into 3D, whilst you're trying to flatten them out! But certainly you have been successful in lodging your words into my brain, so maybe in the far distant future...

And so onto that most controversial of subjects - money. It appears that begging is still something of a problem in the world of Runescape, with many a hard-working player still being plagued by requests for free stuff. Fortunately there are a few truly civic minded young persons who believe in the concept of paying people for all their hard-work.

The people of Runescape have been aquiring[sic] a lot of wealth while the good bankers of Runescape keep our belongings safely stored in their vaults and never asked anything in return.

Isn't it time we citizens do something back and pay some interest on what we keep in our banks? 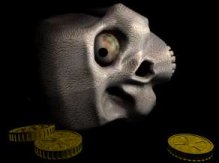 I am happy to say that those who tend the banks are in fact paid by the state, that most generous of organisations which so nobly provides for the welfare of so many institutions.

But Mr.Dalen-Van, I nonetheless salute you in your desire to reward those people who work so hard for the benefit of others. How horrified you would be to learn of some more advanced beggars, who would seem to want the whole world for nothing...

"Why can't you make all runescape for everybody for free, those member signs are very annoying please make every thing free."

One individual even asked me how it feels to be "the first god that requires money to sustain your world." This confused me somewhat, as to my knowledge, Runescape is one of the largest free-worlds of its' kind, with at least one hundred hours of free quests and things to do.

I've received a few notes from Runescapers who "feel left out" of the members game and wish they could access the new features. The answer to is of course... ..become a member! To quote a certain fellow from the Council of Runescape...

We currently need to concentrate on continued development for the membership servers as membership subscriptions pays for all support services (for free players as well), the running costs of all the machines(including free servers), staff wages (who help support free servers) and the development costs of new quests, skills and future technology.

Please remember that the game was free for over a year before membership was even suggested. The fact that we're keeping so many free servers online now is a testament to the goodwill Jagex has towards the many thousands of free RuneScape players. The US$5 monthly membership price is very reasonable considering how much entertainment you're getting. A cinema visit would give, at most, 2-3 hours of entertainment - RuneScape offers so much more than that!

Why not consider becoming a member and help support the continued development of the game?

I couldn't have put it better myself.

But you cannot put a price on compassion, and so I am by no means deaf to your cries...

Greetings, As one of those many residents of your realm living in poverty, I often find myself wondering: Will these new graphics be available for even the poorest of RuneScape citizens? And what if the citizen is using a rustic system to run RuneScape on? What affect will these new and grand updates have upon us misfortunates? Your friend and follower,

And I am happy to announce that the answer is an emphatic yes! Non-members will certainly be going 3-D, and what's more, there won't be any increased lag as a result. So let's give three cheers to the mage Andrew - living proof that the best things in life are indeed free. Which reminds me...

In all candor, I ask that thy might bringith a place for the learned; a library. This would prove useful for those of which wish to aquire[sic] great knowledge in the history of our great land. Perhaps if we were literate... we could forge our own tomes, portraying the history for thine self. Sending Blessings,

What a splendid idea. I know a building in Varrock that hasn't seen a lot of action for a while. I'll have a word with the council, I'm sure that they would be prepared to convert it- such is their commitment to public institutions.

Of course all we need now are some books. Histories, stories, even tales of elves; all these exist but they have been scattered somewhat in the chaos of the last age or so. So if anyone should stumble upon any of these, please feel free to pass them onto me. 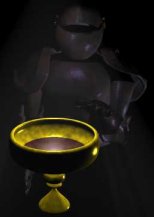 Well, what a generous week it's been. I feel better now. Perhaps we should finish on a poem.

The Runescape World Made Of Might,
Made Of Hard-Workers, Made To Fight. To Fight The Black Hearts Of Those Who Rebel,
To Send Good To god, And Evil To Hell.
To Interact With Our Fellow Human Beings,
To Slay The Demons, And Regroup In Team's.
Hard Work Pay's Off, In Coins And In Armour,
Work As A Miner, Smither Or Farmer.
But One Bit Of Advice, From Member To Member,
Keep Your Friend's Close...But Your Enemy's Closer.

Sound advice indeed. Until next time, my literary friends!