Head to the Northwest side of the 1st floor[UK]2nd floor[US] in the Grand Tree. Speak to Aluft Gianne and agree for the cook's position offered. He will give you the Gianne Cook Book. Inside, it explains how to cook all the different Gnome Cuisine, being Gnomebatta's, Gnomebake's, and Gnomecruchie's. He will then state that he needs you to cook him Gnome Cuisine before being assigned orders. 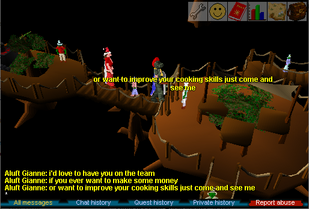 On the tutorial, Aluft will give you the required items required to complete the cuisine except for toads and worms. It is a good idea to have some of them already collected to save some time on the tutorial and on orders.

The first item you are asked to cook is the Cheese and Tomato Batta. To make it, mould a batta from Gianne dough. Bake it, then add tomato and cheese. Bake again, then add equa leaves. Return to Aluft and speak with him to give him the Batta.

The second item you are asked to cook is the Choc Bomb. To make a chocolate bomb, mould a gnome bowl from Gianne dough. Bake it, then add four chocolate bars, and equa leaves. Bake it again, then add two portions of cream, and finish with chocolate dust. Go back to Aluft and speak with him to give him the choc bomb.

The third item you are required to make is the Toad batta. To make it, mould a batta from Gianne dough. Bake it, then mix toad legs, equa leaves and gnome spice and put them on the batta. Add cheese and bake it once more. Return to Aluft and speak with him to give him the Batta.

The fourth item you are required to make is the Worm hole. To make the worm hole, mould a gnome bowl from Gianne dough. Bake it, then add six king worms, two onions, and gnomespice. Bake it again, then finish with equa leaves. Go back to Aluft and speak with him to give him the worm hole.

Lastly the fifth item you are asked to make are the toad crunchies. To make them, mix gnomespice and two toad legs with the Gianne dough and mould into gnomecrunchie dough. Bake them and add equa leaves to finish. Return to Aluft and speak to him to give him the crunchies. At this point Aluft will be impressed enough to allow the player prepare orders and get rewarded for them.

Once you have finished the tutorial, Gianne will assign you an order to prepare and once completed you must speak to him to get some coins and Cooking experience. He then asks you if you want to go on and take another order.

* Glitched at the time of handing out the reward, labeled as handing out 1 tangled toad and 2 worm crunchies.

The Gianne badge could have been associated to completing countless orders for Gianne, however it is unknown if it was ever the case.