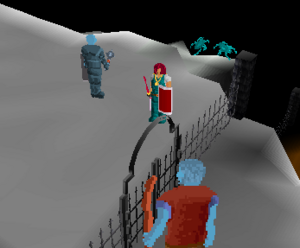 The Frozen Wastes Plateau also known as the Ice Plateau is a small snow covered area found on the western edge of level 40+ wilderness.

It is inhabited by aggressive Ice Giants, Ice Warriors and Ice Spiders. There is a Member's Gate gate separating the plateau in half, the south accessible to free-to-play players and the north accessible only to members. Two leafless trees and one treestump are situated on the southern side of the plateau. An incline from the south populated by Ice Warriors slowly gives way to a flat top plateau.