I visited this wiki, and immediately i saw the background. It is really stretched, and you don't see the meaning of the image unless you zoom out. I think there should come a new background. Please discuss.

I thought of that too, but as runescape classic never has so big images, because the OoO wasn't there yet, and it is a fixed screen. Because of this, we can't really put impressive images at the background.

Do you mean on this? because that on your page is the same as the runescape background, which is not rsclassic-ish. Also, please make sure the background is clear even when the page is not zoomed out. For the current image, it is too unclear in my opinion.Joeytje50talk 16:51, December 7, 2010 (UTC)

You're right the link I gave is more RS2 than RSC like, so never mind about that idea. I would like something that looks like the RSC interface or scenery. I know that's not very specific but I'll be happy to help work on any ideas that anyone has. I also updated the Dutch link and added a link to Sirnot's monaco theme that looked very nice (I know we would have to redo it to work with Oasis). Both of those are good ideas, maybe some pictures of dragons or demons would be nice. Cheers, Tollerach (talk) 23:36, December 7, 2010 (UTC)

Or I could try to make a background of various NPCs/monsters, like an old RS homepage banner? Or even a nice looking location, just the one we have is so gloomy. Nex UndiqueTalk 05:30, December 24, 2010 (UTC)

The problem with the dutch wiki background is that you need big monsters. As runescape classic has a very small screen, this would be hard to make, so i don't think that's a good idea.Joeytje50talk 13:11, December 30, 2010 (UTC)

True, all the monsters are rather small. Sirnot's looks nice, can we try a preview for how it would look on Oasis? Nex UndiqueTalk 18:05, December 30, 2010 (UTC)
If no consensus can be reached, may I please at least change it to a lighter color? Not only are some things hard to read, it so depressing with all the gray. Nex UndiqueTalk 04:21, January 2, 2011 (UTC)

So I guess I'll change it for the time being, until we obtain a new theme. If anyone has any problems with it please direct it to my talk page, and I will try my best to help. Nex UndiqueTalk 17:17, January 7, 2011 (UTC)

Support change - I'm back and I would like to immediately work on stuff which I left to be done when I left. Not trying to be non-neutral, but I support the changing of my old Monaco skin to Oasis, and we could have a poll on what needs to be added to it once we release it. --Sirnot1 23:51, January 8, 2011 (UTC)

UPDATE - I just ported the old Monaco skin I made into the Wikia and Monobook format. There is still much work to be done on both, but I think they would be good as a replacement of both of our current skins.

Suggestion - We need a background pretty badly, so off of one of SirNot's pictures, I made one. This is what it would look like. Any comments? You can test it out by adding

Would it be okay if I implement it, and then people could give feedback? Having a nice background might help attract new users.Nex UndiqueTalk 03:16, April 2, 2011 (UTC)

I support it, the way it is designed out looks good. We can change the color scheme later on, but overall it looks pretty good for a quick change. You could also try the RSC map background, might look good also. --Sirnot1 07:57, April 21, 2011 (UTC) 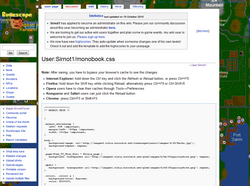 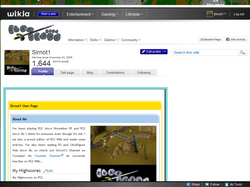