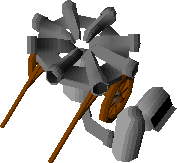 The cannon consists of four pieces: the base, the stand, the furnace, and the barrels.

Setting up the cannon[edit | edit source]

To set up and use the cannon, you must:

The instruction book briefly describes how to use the cannon, it can be bought from Nulodion. See article: Instruction manual