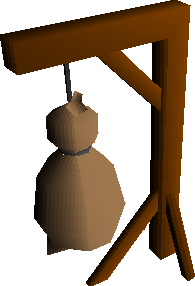 A dummy is an interactable scenery that can be found in Varrock, in the house just north of the east bank. Players with under level 8 attack can hit them and gain a small amount of Attack experience without gaining any Hits experience.

Another dummy can be found in the Handelmort mansion, located in East Ardougne.

Many pures train on these by drinking jugs of wine to lower their attack, enabling them to continue to hit the dummies after they should no longer be able to. Doing this enables them to have a slightly lower hits and higher strength for their combat than other players of the same level, which they believe to give them an edge in PvP. It also allows players to equip a dragon sword at a low combat level.