The Dragon square shield is one of the four pieces of Dragon equipment in RuneScape Classic. It has the greatest defense of any shield in the game, but it can only be worn after completion of Legend's Quest and requires 60 defense. Compared to a rune kiteshield, it provides +4 higher armour bonus.

To obtain one, you must first purchase the right half for a hefty 750,000 coins from the Legends' Guild store. Then, you must obtain the left half as an extremely rare drop from various monsters. Shadow Warriors in the Legends' Guild dungeon have a slightly higher chance of dropping the left half. Once you have obtained both halves of the shield, go to any anvil with level 60 Smithing and you will be able to combine the two halves, creating the legendary Dragon Square Shield.

This shield can often cost anywhere between 10-15 million coins in player-to-player trade. Because of this, this shield is used mainly by wealthy players and players who were lucky enough to receive the left half as a drop. 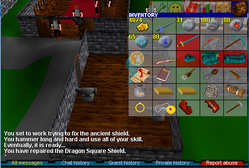 When player is lacking requirements to equip: