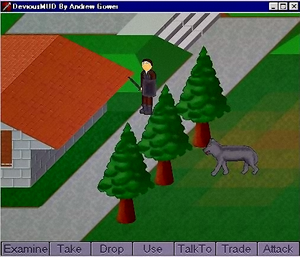 Some of the few available screenshots from DeviousMUD.

DeviousMUD was a game that eventually became RuneScape Classic. It was created in 1998 by Andrew Gower.

DeviousMUD started out in 1998 as a game written solely by Andrew Gower in his home in Cambridge. "MUD" stands for multi-user dungeon. The game had isometric graphics.

A new version of DeviousMUD was released in 1999. Although it was completely rewritten, it kept the same name and remained similar to the original. It was released as a public beta for 1 week. Because of the limited release time, there are only a few screenshots in existence. 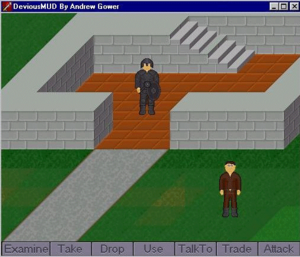 In October 1999, he started another rewrite, this time with his brothers Paul and Ian Gower. A number of changes were made, and the game was renamed to RuneScape, the version that is now referred to as RuneScape Classic.

Most of the places on the maps are currently on the real RuneScape map.

DeviousMud had isometric graphics and was never shown to the public. Only Andrew played this version. According to some sources, this game was written at the University of Cambridge.

A newer version came out in 1999. However, this game was much better, but the name of the game was the same: DeviousMUD. The beta version was only released to the public for one week. Because this was such a short period, people did not take that many screenshots of it. However, it was a downloadable client. 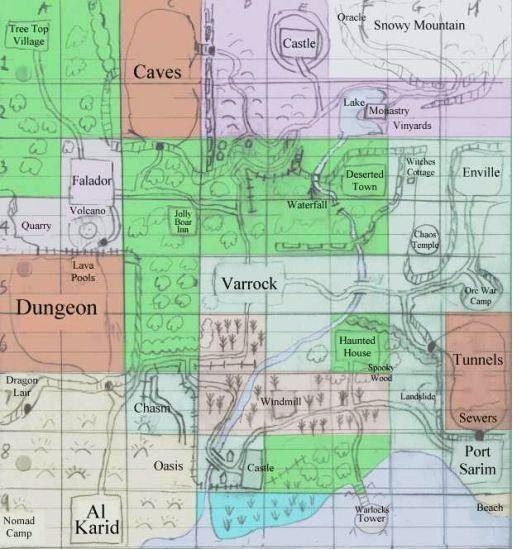 The original world map for DeviousMUD.[1]

The information below is original site material (verbatim), but has since been removed[2]:

Andrew Gower listed updates that he had made [3]:

To do after the second period[edit | edit source]

DeviousMUD's server could hold more people than the current servers in RuneScape. 2500 players could play on this server, but only 97 people played.

The bandwidth you needed for playing DeviousMUD smoothly was 0.3k/sec.[4] 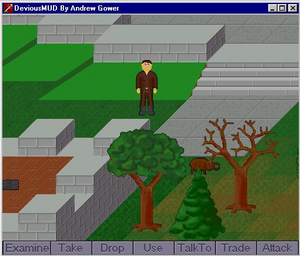 Other of the few available screenshots from DeviousMUD.

There were equipment stats but there is no information on how they would benefit or affect the player.[5]

On your screen were the options: Examine, Take, Drop, Use, Trade, Attack, and "TalkTo". You could talk with that option, just like public chat now.

Two shops and only about 10 objects existed[source needed].

There was only one, not fully made quest: Sheep Shearer[source needed].